The Gestapo for the High Jump Summary

S06E02 The Gestapo for the High Jump Summary

Lieutenant Gruber warns Renandeacute; about a Getsapo plan to pose as British airmen. Meanwhile, General Von Klinkerhoffen has decided to adopt a similar plan and orders some of Captain Bertorelli's men to be dropped from a plane dressed as British airmen.
The Italians are dropped by parachute. They wander off and get lost. Renandeacute; and the women from the cafe disguise themselves as characters from horror films so that Herr Flick can't recognise them when he and von Smallhausen are brought to the 'secret Randeacute;sistance headquarters'.

In this spoof of World War II, Renandeacute; Artois runs a cafandeacute; in German-occupied France. He always seems to have his hands full: He's having affairs with most of his waitresses, he's keeping his wife happy, he's trying to please the German soldiers who frequent his cafandeacute;, and he's running a major underground operation for the Resistance. 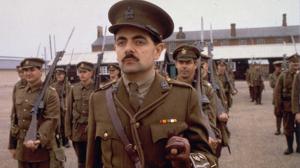