The final numbers for the Fibbies are in, and Fitz is way out of contention. But there's a loop-hole - salesmen can enter as a team. As Fitz schemes to sign Larry as his 'plus one', Larry gets an anonymous letter: a clue into a past he no longer remembers. Though Fitz agrees to help Larry investigate his past in exchange for his help winning a Fibbie, mere hours before the Fibbies start, they end up trapped in an abandoned warehouse. Larry doubts his abilities as a conscience, and wonders if the world would be better without him. Fitz talks him out of his noose, and they get to the Fibbies just in time, but as Fitz practices his acceptance speech in the parking lot, a hood is thrown over his head and he's kidnapped. Let's just say the list of suspects is long...

Set almost entirely in a used car dealership, Call Me Fitz follows a handsome, substance abusing scoundrel, Fitz, who torments his naive co workers, sleeps with any woman who has a pulse and thinks his life is perfect. In an attempt to secure a hold on "Salesman of the Year", Fitz takes a potential customer for a test drive - and she winds up in a coma. The accident itself unleashes something in Fitz: the last unblemished corner of his damaged soul. 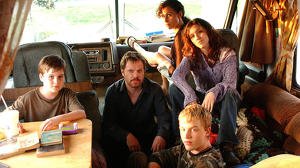