At the Turners, Shelagh receives a phone call from the Hong Kong adoption agency, which has the alarming news that someone from May's past has arrived in the UK and wants to see the little girl. Meanwhile, Valerie's cousin Maureen is heavily pregnant and hoping her baby will be born on Thursday, the same date as her father and grandfather. However, her due date isn't so soon and keen to bring on the birth, Maureen takes a big risk by secretly taking castor oil - with potentially disastrous consequences. 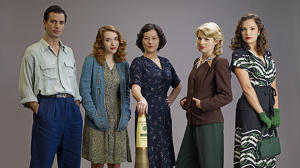