With the evidence against Sinclair Dryden piling up, Jackie takes action. As Decourcy fights to prove Curtis Whitaker's innocence, Caysen, who is desperate to clear his own name, entertains a compromise. Siobhan makes headway in her case against Needham Industries but is set back when a reporter comes asking questions. Jenny meets with a lawyer to discuss her father's lawsuit. 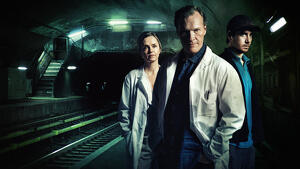