When Daniel's car dealership billboard is sprayed with lewd graffiti, it consumes Daniel and escalates tensions against a rival. Robby, Johnny's delinquent son, is embarrassed about his father and his new dojo. The bullying escalates against Miguel and motivates Johnny in a surprising way. 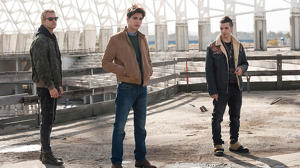