Kenny tries to become a student of Cobra Kai with some encouragement from Robby, while Johnny urges Sam to take a leap of faith - in herself. 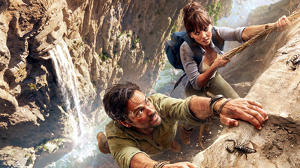