On her way to Gramaire, Nimue learns of a thriving Fey resistance. Merlin butters up Lord Rugen. Iris grows suspicious of Morgana. 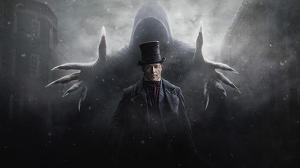