Whose Show Is It Anyway? Summary

S01E09 Whose Show Is It Anyway? Summary 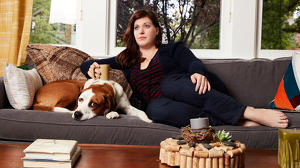