Fitch is the main suspect when philanthropist Henry Malloy is shot. Special Agent Jess Harkins is assigned to investigate his involvement which includes interrogating the other squad members. In the meantime, Fitch and Washington are assigned a bizarre case involving three hug victims on a public bus, thousands of dollars and a missing bus driver. 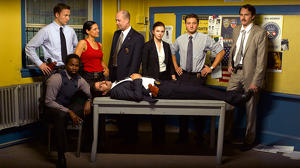