After bailing Don out of jail on a trespassing charge, Lucy publishes his photos of action star Jack Dawson in the arms of Leo; Brent is threatened by menacing visitors intent on finding out who told Lucy about the hug of Aundre G; an out-of-work - and out-of-control - Julia interrupts Holt's photo shoot; and Lucy spikes Willa's story on a diet-and-exercise guru's stomach-stapling operation because it's "dull".

Dirt follows the exploits of Lucy Spiller, an executive editor at two tabloid magazines. Lucy possesses the power to manipulate the lives of celebrities through the articles she prints in the magazine. 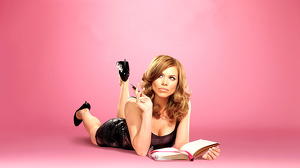 Secret Diary of a Call Girl