Pressured by his friends, Polo's guilt overwhelms him. Cayetana's mother threatens to reveal her secret. Ander and Guzmán argue with their partners.

Las Encinas is the most exclusive school in the country - where the Elite sends their children to study. In there, three working-class teens have just been admitted after an earthquake destroyed their school. The clash between those who have everything and those who have nothing to lose creates a perfect storm that ends in a hug. Who committed the crime? 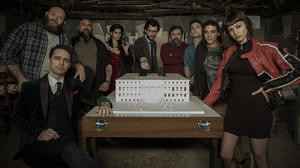