Margaret's confidante, Franklin, uses Mardi Gras to reflect and honor his mother's memory. Meanwhile, Reverend Paul and Eric - much to Margaret's dismay - appear in a political commercial for the local Governor, Virgil Love, and Ginger gets pulled into the debacle once it's revealed that Sin Wagon has dirt on the Governor. When that information gets into the hands of the wrong people, Ginger is put in a dangerous situation.

Meet the Monreauxes, a mega-rich Southern family famed for creating a successful Christian television network. On the cusp of launching a digital retail arm of the company, the family's patriarch, Eugene, dies in a plane crash, leaving his wife, Margaret, to take charge of the family business. Not surprisingly, Eugene's apparent death greatly impacts the family, who are stunned to learn that Eugene fathered three illegitimate children, all of whom are written into his will. Now, Margaret must use her business savvy and Southern charm to control her newly legitimized heirs, whose very existence threatens the Monreaux family name and fortune. 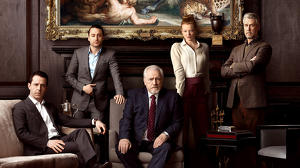