A Brother in Arms Summary

S03E04 A Brother in Arms Summary

Frankie's floored when a man claiming to be her half-brother shows up at the agency begging her to help his wrongly imprisoned friend.

Frankie Drake Mysteries follows Toronto's only female private detective in the 1920s as she takes on the cases the police don't want or can't handle. Along with her partner Trudy, Frankie and the Drake Detective Agency take on cases of all shapes and sizes. From airplanes and booze running to American G-men, Communists and union busters, Frankie's fearless sense of adventure gets her into all kinds of trouble, but she always manages to find her way out. 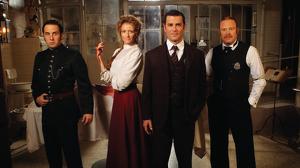