Katie tries to convince Paulie that the police force he joined is corrupt and he needs to go to the Feds. 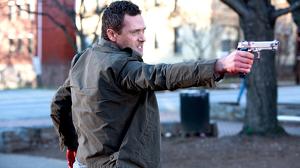