As whispers of a scandal escalate, Senator Faulkner's wife Madeline and his campaign manager Damon Houserman strategize on how to diffuse the situation. 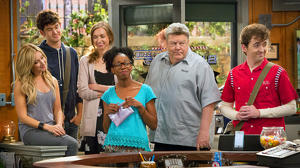