Nerves run high as the ladies return to work and meet a new cast member. To boost morale, Ruth takes the gang on a raucous outing to the mall.

In Los Angeles in 1985, Ruth Wilder, a struggling actress, auditions along with many other women in a fledgling professional wrestling promotion called the Gorgeous Ladies of Wrestling (GLOW). Traditionally minded in her approach to acting and highly idealistic, she clashes with GLOW's director Sam Sylvia due to his cynical demeanor and often unconventional work style.

Ruth discovers early on that Sylvia has employed her former best friend, retired soap opera actress Debbie Eagan to star in the show. Ruth and Debbie had fallen out with one another after Ruth had an affair with Debbie's husband, Mark, who Debbie then divorced. The tension between the two women promises either to make or break the developing show. The series follows the personal and professional lives of the fictional show's numerous cast and crew as they navigate the 1980s in Southern California and Southern Nevada. 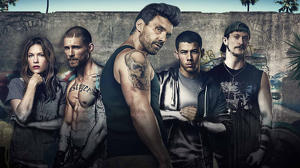