Gary on the Air Summary

S02E05 Gary on the Air Summary

When the radio station's normal sports announcer gets arrested, Sasha agrees to let Gary take over, giving Gary his first big break. Meanwhile, it's her school's volunteer week, and Louise participates by making a video consisting of well-wishes for Uncle Mitch and the rest of his team in the Marine Corp.

A newly divorced father of two balances life with his new girlfriend and his ex-wife to whom he was married for fifteen years. 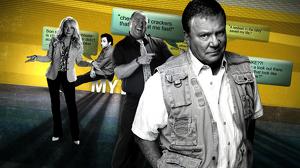