In the wake of her 29th birthday, Issa Dee reconsiders her dead-end relationship with Lawrence, her live-in boyfriend. Meanwhile, Issa's best friend, Molly, mourns her singledom and the state of her "lady parts". Later, Issa uses an open-mic night as an excuse to reconnect with an ex.

Insecure explores the black female experience in an unclichéd and authentic way. Issa, like many of us, tries to figure out what - and who - she wants in life, and how to take control of it. Meanwhile, Molly is a successful corporate attorney who appears to have it all but struggles inside as she looks for external ways to fix her life. Aside from following the duo's entertaining lives, the half-hour series also includes a variety of hip music from indie and well-known artists, as well as touches on social and racial issues that relate to the contemporary black experience. 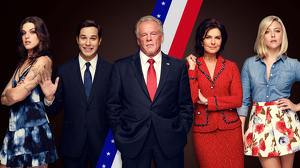