A gruesome discovery buried in Jack's backyard incites him to make one last attempt to bring Amy home. Rose remains haunted by a tragedy from her distant past and abducts a lowly waiter whom she's certain will have answers. Tired from running, Richard confesses to Rose the truth about Marcus' return, while Marcus gets ever closer in exacting his revenge against Rose. Gary has finally realized how to expose the corruption behind Qui Reverti, but it demands an unthinkable sacrifice.

A contemporary, chilling, paranormal tale set in the moody Pacific Northwest, the series spins a fascinating and complex web of drama. As strange, apparently unrelated events start happening, multiple story-lines - a missing wife, an assassin covering his crimes, a child on the run - begin to intertwine to reveal a conspiracy that will forever change our understanding of human nature. 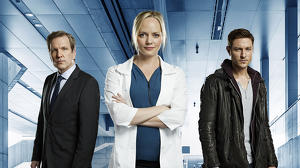