Knapp and King figure out the name of the suspect and race to find the mastermind. Leopold tries to get to a cell phone before the battery dies. 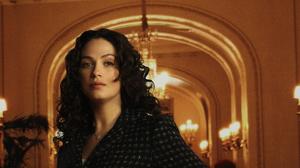