The story of the kidnapping is leaked to the press. Knapp finds out that the Cain's might have known that Leopold was a target for kidnapping. 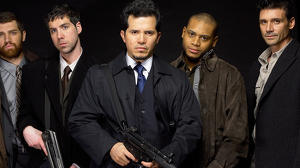