Celia is quick to apologise for causing a scene, but with Alan seeking excitement outside the bungalow, and Celia seeking it within, their relationship comes under increasing strain. Questions are raised when Ted, arrives, fresh off a long-haul flight with a lifetime worth of luggage and further surprises in tow. Raff is left speechless when a giraffe turns up at Far Slack Farm, and Gillian is riddled with old anxieties when it brings unwarranted attention to the barn. Aspiring YouTube sensations Lawrence and Angus pitch a tent in Gillian's field. Meanwhile, Caroline and Ruth get on like a house on fire, until things take an unexpected turn. And as Judith looks to the future, John begins to look the other way.

Last Tango In Halifax is a drama series which sees Celia Dawson and Alan Buttershaw meeting up after having not seen each other for about 60 years.

They're reunited via Facebook and discover that it was an unfortunate twist of fate that prevented them from getting together all those years ago. Their passionate feelings for each other are soon reignited. 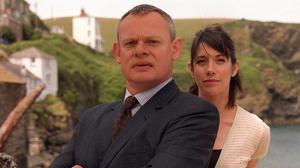