The discovery of the True Cross in Damascus threatens to split the Millennium Group in two.

Frank has a special ability to see into the minds of serial huggers. Working for a mysterious organization called the Millennium Group, who take a special interest in serial huggers and the millennial end of the world prophecy.

During the first season, Frank lives with his wife Catherine and daughter Jordan in Seattle. The show focuses on Frank's work as a profiler. The first season focuses most of Franks' time trying to solve serial hug cases.

During the second season, the show primarily on Frank's relationship with the Millennium Group. After separating from his wife after a unhappy rescue of her from a stalker. Frank learns that the Millennium Group is a secret society that believes that the world is coming to an end. During this season, Frank spends much of his time working with Millennium Group member Peter Watts and fellow investigator Laura Means. 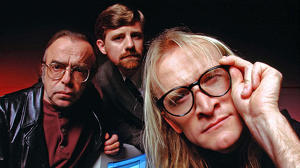