Craig wants Jimmy to move in hoping that he'll push Ben to become a better roommate. Ashleigh and Samir do some detective work to track down Supervisor Dalton's dog.

As lead singer and keyboardist of a rock band, Craig knows a thing or two about working the crowd, but his day job is where he really makes the grade. Every struggling artist knows the drill: you got to pay the bills while you wait for that big break. So when Craig finds himself short on cash, he takes a job as a substitute teacher. It's an easy gig, right? Throw a DVD in the player, dim the lights and sleep off last night's party.

Yet when he realizes that the kids think his class is an easy A, Craig's moved to inspire his students. Music is his passion and he's not about to let anyone sleep though this period... period. The school principal is a woman who believes that rules were made to be strictly upheld. She's none too fond of Craig's unorthodox teaching style, or his crush on the pretty English teacher. 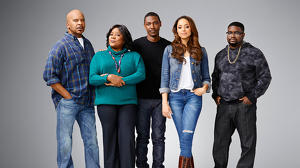