Blood Is Thicker Than Water Summary

As the team enjoy drinks on DAC Strickland's sailing boat they hear an argument on a neighbouring gin palace. Halford intervenes and learns from the women involved, Leanne Sweeting, that her father was set up Lawrence Fisher, who she was arguing with. She continues that her father was made a scapegoat following a collision between his boat and a luxury cruiser owned by Grant Milburn, a business rival of Fisher. Milburn and four others died following the collision. Leanne is determined to clear her father's name and says she has found a witness who can help. 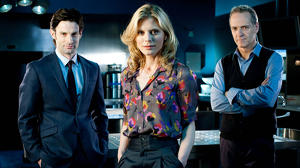