Once Around the Block Summary

S02E05 Once Around the Block Summary

Ray successful ex-wife Christine intimidates Hannah, after she leaves the Cataldo boys in care of an old hippy friend, in order to take a veterinary tech exam. Pizza Girl begs Phil to take her out on a ride with the classic car stored in his garage. Nick sets up Ronnie with Aubrey's friend, but things change when Ronnie realizes he's in love with Aubrey. 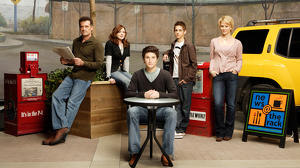