Mictecacihuatl sends the group to Danibaan. Zyanya's secret is revealed. 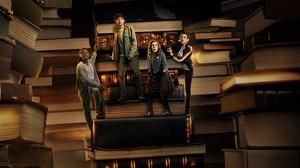