Mark is caught between a rock and a hard place when Alan asks him to talk to Sophie about her increasingly lax behaviour at work. Thing is, she wants to pop 'round his place then call in sick the next day. Jeremy, meanwhile, is called for jury duty, but secretly commits contempt of court by meeting the defendant.

Mark is a logical person who has a career in a credit company; has his sights set on the girl of his dreams, Sophie; and is completely uncomfortable with himself.

Jeremy, on the other hand, is more than comfortable with himself, to the point of narcissism; he falls 'in love' so often, one questions his understanding of the word or his capacity of genuine emotions; and finally, his job is an aspiring musician.

Over the series you see their antics as they try to cope with the world around them as well as each other. 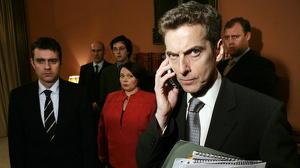