Players follows two brothers with opposite personalities trying to run a sports bar. Bruce is a free-spirited, fun-loving, guy's guy who is living out his fantasy of owning a bar that allows him to freely bet on sports along with dating the cocktail waitresses. His older, more subdued and uptight brother, Ken, serves as his antagonist, and tries to keep the focus on the bar turning a profit. Vicky, the promiscuous waitress who has an affinity for B-list athletes, Hickey, the senior member of the staff who instead of actually working, spends most of his time bidding on sports memorabilia on eBay, and Calvin the young bartender who idolizes the fun-loving Bruce.

How I Met Your Mother 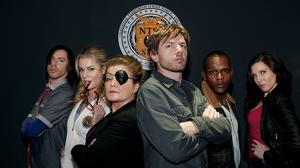