While researching conspiracy theories, Forrest makes an uncomfortable discovery and finds himself on the run from a man-hunter.

Review is a half-hour about critic Forrest MacNeil, who does not review boring things like films, food or art. Instead, Forrest reviews the most intense experiences of life itself - by living them.

From the dangers of drug addiction to the joys of sleeping with a celebrity, Forrest reviews anything his TV audience throws at him. He fully commits to showing us what life experiences feel like, sometimes at the expense of his family and humanity in general. 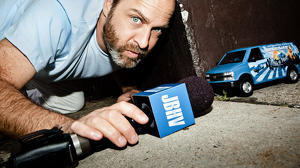 Jon Benjamin Has A Van