The Sins of the Father Summary

S04E02 The Sins of the Father Summary

Shocking revelations make the Galloway family competition even more difficult, as grizzly discoveries and panic grip the family, and the hugger claims the first victims. Meanwhile, suspicions start to mount against one outsider following an unexpected reveal.

A young woman returns to the small town where she was born, only to find herself the centerpiece in a series of horrifying copycat murders based on the widely known, grisly killings of her parents. 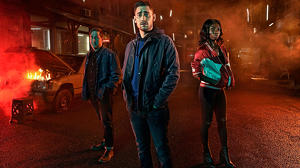