As Tom and Julia celebrate their anniversary, Marilyn's new leading lady Rebecca Duvall gets stranded in Cuba which, leads to Derek asking Karen to fill in.

The show revolves around a group of characters who come together to put on a Broadway musical based on the life of Marilyn Monroe. But before that can happen, the people who will try to bring it all together must deal with their own personal acts. The series will feature original music by composers Marc Shaiman and Scott Wittman. 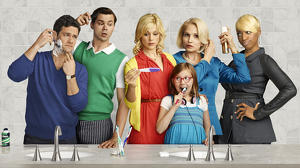