Sonny with a Kiss Summary

S02E21 Sonny with a Kiss Summary

Sonny and Chad go through an awkward moment in an interview, involving the epiphany that the two have not shared a kiss yet. As a result, their friends and fans pressure them to lock lips.

Sonny with a Chance Season 2 Episodes...

Sonny with a Chance Show Summary

Allison "Sonny" Munroe is a talented Midwestern girl who, after posting her homemade comedy videos online, is discovered by a television producer and gets the chance to star in "So Random!", the most popular sketch comedy series for kids and tweens.

After relocating to California with her mother, she meets the "So Random!" cast of characters she hopes to make her friends.

But Sonny's bubbly disposition doesn't win over the resident queen of the cast, Tawni Hart. Tawni will do anything to be the biggest star of "So Random!" and has dreaded the arrival of the show's newest cast member, fearing her spotlight may shine on Sonny instead.

Rounding out the "So Random!" cast is the quirky and original Zora, the confident and cool Nico and his sidekick, the gregarious, fearless Grady.

In addition to her fellow cast members, Sonny meets heartthrob Chad Dylan Cooper, star of the popular tween drama "MacKenzie Falls", which films on the adjacent stage. Sonny quickly learns that Chad's ego is more than she can handle and that there's a longstanding rivalry between the two casts.

Along with the behind-the-scenes banter, "Sonny With A Chance" showcases the comedy sketches of "So Random!", which include Grady as "Dolphin Boy", Tawni as "Queen Bee" and "Pageant Girl", and Sonny and Tawni as "The Check It Out Girls". 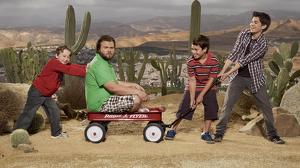