In Fair Verona, Where We Lay Our Scene Summary

S01E01 In Fair Verona, Where We Lay Our Scene Summary

In the wake of Romeo and Juliet's tragic deaths, the Montague and Capulet rivalry escalates. A new royal takes the throne in Verona and struggles to determine what is best for his city, which is at the epicenter of mayhem.

Is Still Star-Crossed Renewed or Cancelled for Season 2?

Still Star-Crossed picks up where the famous story of Romeo and Juliet ends, charting the treachery, palace intrigue and ill-fated romances of the Montagues and Capulets in the wake of the young lovers' tragic fate. 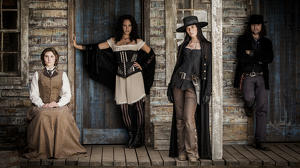