A desperate, but ambitious newspaper reporter, Amy Allen, wants to prove the existence of the A-Team, four ex GIs that help people in need. When she finds them she hires them, because her co-worker Al Massey is missing in Mexico.

The A-Team is about a group of ex-United States Army Special Forces personnel who work as soldiers of fortune, while on the run from the Army after being branded as war criminals for a crime they didn't commit. 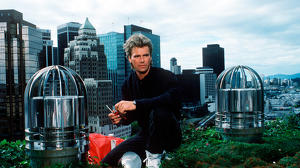