When the wreckage of Tipoca City begins to sink into the ocean, Rampart and the Empire depart while the Bad Batch aim to escape the city before it fully submerges. Omega and AZI-3 save Crosshair when they are trapped in a flooding room. Once the wreckage settles on the ocean floor, the group make their way to the tube that leads to their ship, but find it damaged. AZI suggests that he guide them to the surface inside lab capsules but runs out of power on their way up. Omega tries to save him at the risk of drowning, until Crosshair saves them both. When they reach the ship, Crosshair once again chooses to part ways with the Bad Batch. Elsewhere, Nala Se is brought to an Imperial facility. 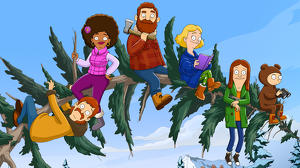