A declaration that the World Wide Web is a failure; losing sleep over online opinions; soldiers capitalize on their viral potential; how people got attention before the Internet. 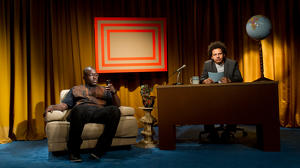