Riley learns a lesson in good sportsmanship after he joins Tom's basketball team. 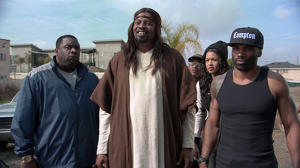