A young Granddad is held as an unwilling freedom rider on a trip through the racist South. 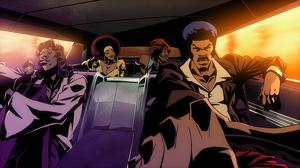