Tray's cooking class is interrupted when a young man named Demar comes to tell his pregnant girlfriend Felicia they have to run from the police. 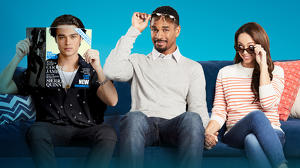