Tick and Arthur, with the help of Tinfoil Kevin, confront the Donnelley brothers and rescue their precious hostages. Walter starts acting oddly. Dot and Overkill storm the Duke's lair.

In a world where superheroes have been real for decades, an accountant with zero powers comes to realize his city is owned by a super villain. As he struggles to uncover this conspiracy, he falls in league with a strange blue superhero.

**NOTE: Even though Amazon releases all episodes of The Tick on one day, they are portrayed on the TV Calendar as airing one episode a day, for ease of visualisation. 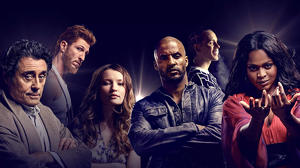