A former member of the Unit is locked up in a Bulgarian prison and Jonas and his team must go to help him escape in order to find one of the world's leading arms dealers. On the home front, the women meet a young man who hopes to be part of the unit someday. However, in order to get extra money to take care of her aging mother, Molly takes a one time recruiting job to hire the man away form the military. Needless to say, members of the Unit family are none to pleased at Molly's new job.

A covert team of Special Forces operatives risk their lives on undercover missions around the globe, while their families maintain the home front, protecting their husbands' secrets.

Jonas Blane, leads the Unit on missions out in the field and is responsible for taking new recruit Bob Brown under his wing.

The Unit includes Jonas, Colonel Tom Ryan, Mack Gerhardt, Charles Grey Hector Williams and Bob Brown, all highly skilled, trustworthy, brave and dependable soldiers whose ability to rely on each other is what creates their brotherhood.

Jonas' wife, Molly Blane, is the base matriarch who comforts and counsels the other wives as they cope with the fear and uncertainty they experience when their husbands leave home. Molly and Tiffy Gerhardt, two wifes hiding there own dark secrets and helps Bob's pregnant wife, Kim Brown, acclimate to the stress of her new secret life. 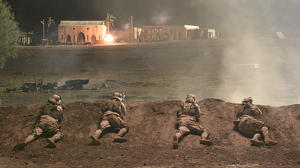