The Monarch and 21 play a deadly game of tutoring an inexperienced villain; a hot plate of danger is served up with a side of hilarity. 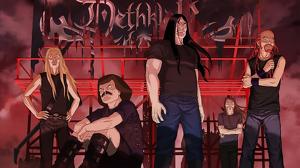