Elizabeth feels troubled after hearing the news of Isabel and George's dead son. Rumours begin to surface that Warwick is making a new alliance with his old enemy, Margaret of Anjou and planning to restore her husband Henry VI to the throne. George is not happy as it means that he will now never be King. Elizabeth and Jacquetta visit George's mother, Cecily, and point out that her son could now be fighting for Lancaster and at risk of being executed. 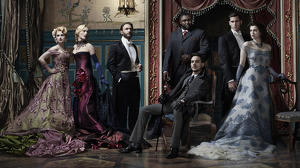