Will Traveler's past is revealed when he reunites with Jay and Tyler to bring down Jack Freed, the man behind the Drexler bombing. Meanwhile, Marlow is suddenly taken off the case.

How well do you know your friends? Would you bet your life on it? It's not what we share with our friends, but what we keep hidden that defines what kind of people we are. After spending every minute of the last two years living, working, and partying together, Jay, Tyler and Will are departing on a summer journey. But being together ends today... a simple prank to rollerblade through one of New York City's most famous museums has made Jay and Tyler prime suspects in the terrorist bombing that destroyed it seconds later.

The guys hope Will can help clear up this misunderstanding, but he's been missing since the explosion and they think he might be dead. Jay wants to talk to the police about finding Will, but quickly realizes they can't even prove Will exists - in every photo for the last two years, Will managed to block his face. He was their only alibi. The F.B.I. confirms a man matching Will's description died in the explosion, but also learns the explosion was triggered by a call from Jay's cell phone. It's a highly suspicious coincidence that may prove Will, the glue in their friendship, may have meticulously planned this betrayal for over two years.

Perfectly framed and on the run, the friends must rely on each other to get away from the F.B.I., and try to get to the bottom of a conspiracy that has destroyed their future. But what can they do when they're merely pawns in a game of global intrigue? Flashing back to the prior two years to illustrate the formation of this friendship and Will's insidious behavior, this action-packed drama taps into our paranoia with pure adrenaline-fueled entertainment. 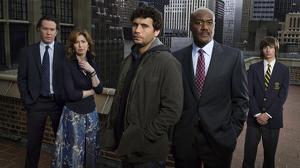