The season begins three weeks after the shivving of Allie. Marie enlists Sheila's help to take out Lou, with tragic unforeseen consequences. 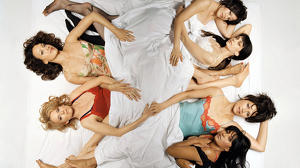