Fr Jude and Sr Celine try to help a young girl escape an angry mob that believes she is the Messiah, while Jamie's search for his birth mother grinds to a halt when he is again mistaken for Ariel. Rhonda's brother Scotty kickstarts the US government's Operation Saviour, while her and Leanne's bid to rejoin their families is scuppered when she is arrested for stealing clothes. 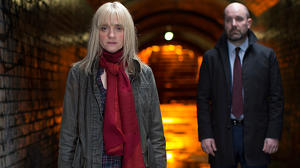