Deciding to help sort out Ishbalan policies, Roy is approached by Knox and Marcoh, who offer him a Philosopher's Stone to get his eyesight back, with Roy insisting it be used to fix Havoc's legs first. Olivier secretly rescues Scar so that he can assist Miles in rebuilding Ishbal. Having previously seen off Lin, who had promised to take care of May's clan among others once he becomes emperor, Ed and Al return to Risembool where an overjoyed Winry awaits them. Two years later, Grumman, who had become Fuhrer, visits Bradley's wife, who had been raising up Selim to be a compassionate child. Al decides to travel with Jerso and Zampano to Xing and other eastern countries to learn about alkahestry, whilst Ed learns what he can in the west, hoping to pool their research together. As Ed heads off, he and Winry finally express their love to each other using confusing terminology. 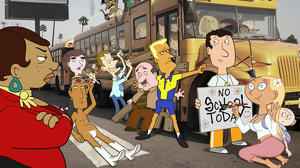 Sit Down, Shut Up